I was just surfing the web to find out what people thought about Doctors with beard. But what the google search box suggested was rather intriguing. I couldn’t help but click on the “Doctors with tattoos” option to find out more. May be because albeit being a Doctor, i too have a tattoo but rather on my deltoid, well-hidden especially when at work.

It was back during my PG days, on my road-trip to Goa with two of my buddies Ashok(who is no more) and Gopi that i got my tattoo. After dancing out all night on that new year’s eve, the next day morning I was woken up by Ashok with the question “Am going to get myself a tattoo. You wanna join me?”. I was too somnolent to process his question and just decided to get it done just for the “cool-factor” in it. After finding a proper shop, a design and making sure that they had proper sterilisation, both of us got tattooed. We were pretty much in tears due to the level of the pain which we never expected. What was worse was the burning sensation we had to deal with for the next 3-4 days till the wound healed. But of course, I hadn’t told my family (except my brother) about it but decided to upload the tattoo on Facebook (Was I smart or what). And my Dad’s sister of all the people came upon it and told my Dad immediately. After a few failed dramas and threatenings to make me remove my tattoo, my dad decided to drop it. 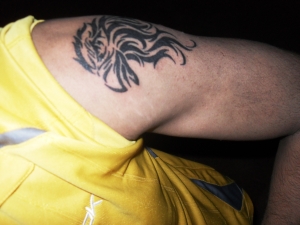 Coming back to the subject i was talking about at the beginning. One of the points that my Dad brought up in order to make me remove my tattoo was my profession. His argument was “What will patients think of a Doctor with a tattoo?” which was a really poor point to argue with since my tattoo was well-hidden when I wore even a half-sleeved shirt. But after that, so many people have pointed out the same thing to me and raised a few eye brows upon getting a glimpse of my tattoo when I was at home. “How can you have a tattoo being a Doctor?”

Incidentally, i had to come upon the same topic today. It’s been quite some time since some one asked me that question. What I found out in the web was that Indian doctors are not the only ones facing that question. Even Doctors abroad in countries like the USA, even more as a matter of fact find themselves in a similar scenario. What makes getting tattooed so out-of-context if it’s a Doctor? Aren’t Doctors also regular people?

In one of the blogs, one Doctor had gone so far to even list out the number of “regular things” that he does just like regular people when he is not playing the Doctor. Doctors ARE regular people like anyone else with their own set of unique skills. Aren’t we supposed to have some “coolness” or “trendy” options too? Is it that patients lose confidence in a Doctor’s ability to perform his duties and his clinical acumen are shaken when they find out that he/she has a tattoo?? Or is it just that we over stepped the line by getting tattooed and henceforth deemed ineligible to be bestowed upon with the nobility that comes with being a Doctor?

In India, the stigma not only not only applies for the Doctors, but to the youth in general, unless and until you have one of those uber cool dads and moms. Getting tattooed is usually frowned upon. As if a tattoo is something for the delinquents and not the dignified. That too Surprisingly in a country like India where we have had tattoos for decades. Just because a generation or two decided to skip getting tattooed, now it has nearly become taboo. Times change and so do people. A decade from now, who knows what will be in vogue. Tattoos are just a type of body art, unless and until it is obscene or hurts an individuals belief or sentiments, I see no reason in treating a tattooed person like as if he/she were a social outcast or sociopath. After all, it’s just a tattoo guys..

2 thoughts on “It’s just a tattoo”

It's me and my experiments with life

Cooking with a Wallflower
Cristian Mihai

writes one short story every week